Knowing how to quickly grab screenshots on your Windows 11 PC can come in handy. There are several reasons why you may want to take a quick snap of your screen including sending an error message to your company’s IT department, posting a funny image or important information on social media, preparing troubleshooting guides, capturing tweets before they are deleted, taking a screenshot of your video chat, etc.

Use Print Screen Key (PrtSc) to Capture the Fullscreen

Print Screen (PrtSc) is the most versatile and basic screen-capturing keyboard shortcut in Windows. The Print Screen shortcut lets you capture a full-screen screenshot on your current screen. All you have to do is press the PrtSc or Print Screen/Sys Rq button on your keyboard.

Once you press the PrtSc button, it automatically saves the screenshot of the entire screen to your clipboard. Then, you can paste the captured screenshot on any image editing or text editing application, like Paint or Microsoft Word, or even into the body of an email via the Ctrl+Vkeyboard shortcut or by right-clicking and then choosing the ‘Paste’ option from the context menu.

If you have multiple monitors, the PrtSc will capture the content from all your monitors as a single image and copy it to the clipboard.

Capture and Auto-Save the Screenshot

The PrtSc keyboard shortcut only captures the screen and copies it to your computer’s clipboard but it doesn’t automatically save it anywhere. It can be easily replaced by any other content cut or copied after it.

Alternatively, you can enter C:\Users\[User_name]\OneDrive\Pictures\Screenshots in the address bar.

You can also use keyboard shortcuts to automatically save your captured screenshots to OneDrive. However, this needs a little setting up:

To set up your screenshots to automatically save to OneDrive, right-click OneDrive’s cloud icon in the taskbar overflow.

Then, click on the cog icon at the top left corner of the OneDrive window and select ‘Settings’.

Under the ‘Sync and backup’ section, turn on the toggle for the ‘Save screenshots I capture to OneDrive’ option.

Now, whenever you take screenshots natively using Windows hotkeys like PrtSc, and Alt+PrtScn, it automatically saves the screenshot to the OneDrive cloud. This eliminates the need for pasting the image from the clipboard to an image app, saving the image on your computer, and then moving it to OneDrive. Once saved on the cloud, you can access it from any device where you can access OneDrive.

Both PrtSc and Win+PrtSc keyboard shortcuts are very useful but they are not flexible. In case, you only want a specific window of the app in the screenshot, you would have to capture the entire screen and manually crop out that window using image editing software.

After you press the Alt+PrtSc hotkeys, you can paste the screenshot from the clipboard to a word processor or an image editor.

The Snipping Tool is a new integrated screen-capturing utility that comes with Windows 11. It replaces the legacy Snipping Tool and Windows 10’s Snip & Sketch tool. It is a great tool for capturing free-form, rectangular, full-screen, and active window screenshots. The quickest way to get the Snipping Toolbar running is by pressing the Windows+Shift+S keys simultaneously.

Once you press the shortcut keys, the snipping toolbar will open as an overlay on the top of your screen as shown below.

Then, you can select one of the four options using the mouse to take a screenshot.

Alternatively, you can use the Tab key to switch between the options in the overlap and press Enter to select the option.

Once the screenshot is captured you will see a notification at the bottom left corner of your screen and when you click on it, it will open up in the snipping tool where you can take screenshots as well as annotate, edit and share your screenshots.

You can also open the tool by just pressing PrtSc. By default, the PrtSc button is set to take a full screenshot of your screen.

To set up the PrtSc button to launch the Snipping tool instead of taking screenshots, follow these steps:

First, type ‘Snipping Tool’ in Windows Search and select the result to open the tool.

When the Snipping Tool opens, click the three dots icon and select the ‘Settings’ option.

In the Snipping Tool settings, click on the ‘Change in Windows settings’ link under the Shortcuts section.

Here, turn on the toggle for ‘Use the Print screen button to open screen snipping’ and restart your PC.

All you have to do is type ‘Snipping Tool’ in the Windows Search or the Start menu and you will see the three delayed screenshot options on the right-side pane:

Select one of these options to start a new screen snip.

All the screenshots captured by the snipping tool or any other tool will be stored on the clipboard. Windows 11’s new clipboard allows you to access all your recent screenshots in one place. To view the history of screenshots copied to the clipboard, press the Windows+V shortcut key. Then, select a screenshot from the clipboard and paste it anywhere you like using Ctrl+V.

Once you press the hotkey, the Xbox Game Bar will appear at the top of your screen as shown below.

Now, click on the ‘Capture’ icon in the game bar to open the Capture widget.

Alternatively, you can also click on the ‘Widgets menu’ icon and choose the ‘Capture’ widget to open the Capture widget window.

In the Capture widget window, click the camera icon to take a screenshot of the current app window (or desktop).

You can also use the below shortcut key to quickly take a screenshot using the Xbox Game Bar.

You can also record a video of your current app by clicking the ‘Record’ button in the Capture widget or by pressing the Window + Alt + R hotkey.

This will open the Gallery widget where you can view, rename, share, or remove the shortcuts you have taken using the Xbox Game bar.

You can also open the Gallery widget by clicking ‘Widget menu’ from the game bar and selecting ‘Gallery’.

Xbox Game Bar automatically saves all the screenshots captured or videos recorded using the tool to the C:\Users\[user_name]\Videos folder.

To open the folder where screenshots are saved, you can click the ‘Open in File Explorer’ button on the Gallery widget.

Alternatively, you can navigate to the below location using File Explorer:

Replace rajst with your username.

If you don’t prefer the default game bar shortcuts, you can also set up your own Xbox Game bar screenshot shortcuts. Follow these steps to set up shortcuts in the Xbox Game bar:

First, launch the Xbox Game bar with the Win + G shortcut. In the Game bar, click the ‘Settings’ icon and go to the ‘Shortcuts’ tab.

On the right-side pane, you can create new shortcut keys for opening Xbox Game Bar and Taking a screenshot.

Click on the text field below the option and set your desired hotkey. But make sure to use Ctrl, Alt, or Shift keys along with at least one other key in your shortcut. After adding the hotkeys, click the ‘Save’ button below and restart your PC.

After the restart, you can use the custom shortcut keys you created to take screenshots with the Xbox Game bar.

Unlike Windows PC, tablets and a few other Windows devices lack the physical Print Screen button. Even the on-screen keyboards on tablets don’t have the PrtSc key unless you have a keyboard attached. However, you can still take screenshots on those devices easily. Here’s how:

There are several third-party software out there that allow you to capture different types of screenshots such as the entire screen, window, scrolling window, freehand, selected region, etc. These tools include PicPick, ShareX, Greenshot, and Snagit. Third-party tools provide all the screen-capturing options that Windows’s inbuilt tools offer and more. These tools also allow you to customize or create hotkeys screenshot options.

Use PicPick Tool to Capture Screenshots

PicPick software is a screen capture and recording tool available as both free and paid versions. Although the free version is only meant for personal and non-commercial use, it offers options to capture anything including an entire screen, an active window, the scrolling windows, and any specific region of your desktop, etc.

In addition to taking screenshots, the tool also allows you to annotate, edit, share, and highlight your images as well as add effects to your image. PicPick is a very straightforward and easy-to-use tool that shares a similar UI as Windows Paint. Here’s how you can install and customize hotkeys to use the tool:

Then, open the folder in which you downloaded the PicPick setup and double-click the ‘picpick_inst.exe’ to run the installer.

To change the default installation path for the app, click the ‘Browse’ option. Then, select the ‘Install’ button to finish.

The tool will also be automatically added to the Startup programs, so you can quickly access it from the system tray.

After installing the app, launch the PicPick tool from the Start menu. From the toolbar, click the ‘File’ menu.

Then, click the ‘Options’ from the left-side panel. Under the Screen Capture section, you can see the list of available Screenshot options.

In the Program Options window, go to the ‘Hotkeys’ section on the left and you will see the list of screen-capturing options and their shortcut keys.

The default keyboard shortcuts for Screen Capture options in PicPick are:

However, you can also change these shortcuts using the options below the Screen Capture section. To change a hotkey, select Shift, Ctrl, or Alt and one other key from the drop-down menu (one of the alphabet, number, or function key. After changing the hotkey combinations, click ‘Ok’ to save.

PicPick is similar to the Snipping tool when you press any of its shortcut keys, the PicPick toolbar will appear at the top screen which lets you switch screen capture modes and take screenshots.

To take a screenshot of an entire website, press the Ctrl+Alt+PrtSc shortcut or the custom hotkey you have set using the above method. Alternatively, you can click on the PicPick tray icon, go to ‘Screen Capture’, and then ‘Scrolling Window’.

First open the webpage you want to capture, then press the Ctrl+Alt+PrtSc shortcut key. After that, click on a webpage and wait until the tool automatically scrolls through the whole page and captures it. 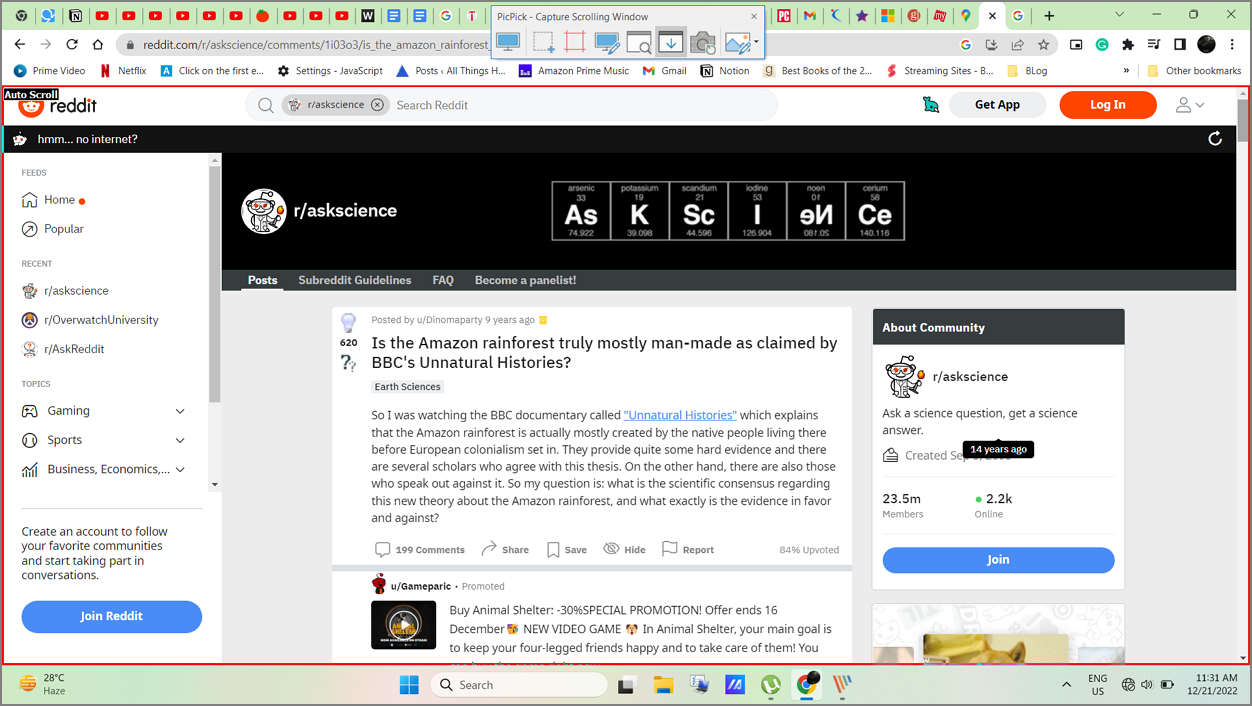 Don’t change tabs or switch apps until the process is complete. Once, it is finished scrolling, it will automatically open the screenshot in the PicPick screen editor.

That’s it. Now, you know how to take screenshots like a pro on Windows 11, whether you need to take them for work or a passion project.

How to Turn Off Background Apps in Windows 11

How to Fix Hypervisor Error in Windows 11